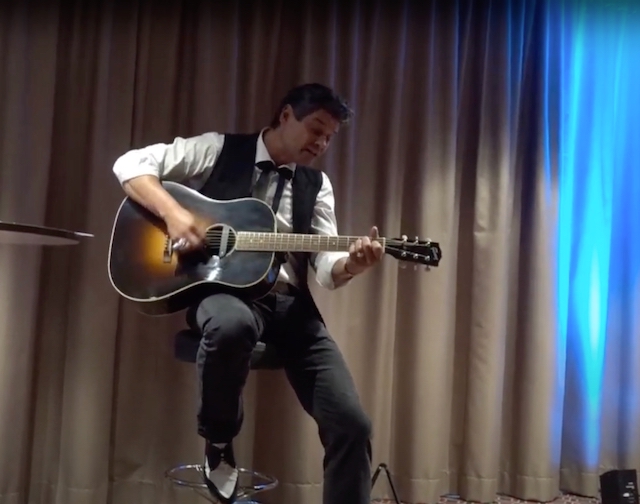 Within the newly created event series “AAS After Work Cocktail”, taking place at the Sheraton Grand Salzburg, board member and passionate guitarist Martin Langer took his listeners on a musical journey of the US. The first episode of the event series covered the Southwest of the US ranging from 1850 to 1950, Martin told the "Story Of The Blues" Music from Muddy Waters, Robert Johnson, Carl Perkins and Hank Williams, (also the Cowboys had the blues). Johnny Cash with his roaring Boom Chicka Boom Sound sounds represented the second station of Martin’s musical journey. It has been almost like Johnny Cash was back! The sound of the Wild West dealing with well known songs such as Susanna, Old MacDonald and Tom Dooley was the main topic of the third episode. It therefore was a perfect chance for the listeners to sing-a-long at the top of their lungs. During his interludes Martin was supported by Conny on the contrabass and his son Tommy on the guitar and the harmonica. This has added additional weight and power to this extraordinary kind of music. Unfortunately the journey came to a sudden halt due to Corona.

Stay calmed for the next station!

In the meanwhile you may use the following video for tuning in:
"The Story of The Blues" by Martin Langer

More in this category: